First, let’s start with a definition of a “stone shot” and a “top Shot”.
As the name implies, “stone shots” are small, gentle, explosive blasts employed to generate usable slate blocks from a solid bed of stone. The goal is to use just enough force to loosen blocks of slate for extraction, often by opening up natural joints in the slate, but not so much force as to fracture or damage good stone.
This stands in contrast to “top shots”, which are designed to remove unusable overburden from the slate deposit. The goal with top shots is to break the overburden into small pieces with more explosives in closely spaced holes, to facilitate removal with an excavator.
The “stone shot”, pictured below, included drilling 10 holes on a natural joint that ran lengthwise to the stone and parallel to the free side (these are referred to as the “grain holes”- think wood grain, ripping a board along the grain) and 5 holes on the “butt end” or bottom (to continue the wood analogy, this would be cutting across the wood grain). Each hole was drilled 13 ft deep.

Explosives were added to the holes, and in sequence, the explosion detonates first in the 10 grain holes and then a fraction of a second later in the 5 holes across the butt.

Within seconds the whole explosion is over and the shock has gently loosened or “bumped” the stone for careful extraction with an excavator.

The second photo shows how the explosion actually opened up the stone in two cracks. This means that there were two natural joints running parallel. 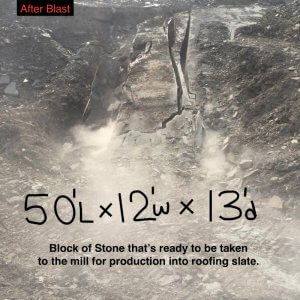 This successful blast generated enough stone to keep everyone at the mill very happy (and busy) for several weeks! Congrats to our Quarry Manager, Dave Murray.

Saddle Hips… are they most common on slate roofs?